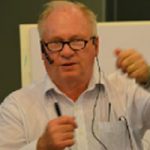 The third big question posed to Dr. Robert Cooper in our ‘Ask the Agile Stage-Gate Expert’ series is about roles of team members in Agile (versus traditional) stage-gate. Here is what he says:
Dr. Cooper: There is a fair amount of controversy and some disagreement among manufacturers regarding the ‘roles’ of people in the new Agile-Stage-Gate system. Some of the confusion comes from the fact that most manufacturers end up using a ‘blended’ system – most of their projects still use the traditional or classic gating process, and a smaller proportion – say 20% of projects (often the riskier or more ambiguous projects) – use Agile-Stage-Gate. Thus they argue that the roles should stay the same as today, because one cannot have two sets of roles in development — a real mess. Of course, in the software world, this is not an issue, as all the code-writing projects in a software firm typically would be done using Agile, not a blended process.
Bottom line, recognizing there are differences of opinion among firms, for manufacturers:
— the process manager’s job stays much the same as today, except now s/he is overseeing two different types of projects – traditionally-gated projects and Agile-Stage-Gate projects. So it’s a bit more complex. But they still coach the teams, facilitate the gate meetings, keep the database, produce portfolio charts, provide training, etc.
— the project leader – most manufacturers have kept this role (but some have opted for the ‘product owner’ role instead. Product owner = a member of management, not on the project team, who meets with the team regularly and provides direction; in this system, there is no team leader per se on the project team!)
— scrum master – a new role, on the product team, a “servant” of the team. Ensures that the team works well, and follows the Agile practices (daily scrums, sprint planning, demos, retros, etc.). Some scrum masters serve 2 teams out of necessity.
–– project team – for manufacturers, still a cross functional team (Technical, Marketing, Operations, Sales), but in theory 100% dedicated to the one project. Quite different than Agile in the software world, where the ‘team’ is a room full of ‘techies’ or software writers. Most manufacturers break this ‘100% dedicated’ rule for good reason, it’s not practical for them – some assign certain days to the Agile project, for example. While it is not always possible to dedicate a full time team, it is important to have a defined approach of some kind versus leaving it to chance. Resource management is a tough issue and the ‘elephant in the room’ for many companies trying to do Agile-Stage-Gate. Getting the right resources can make or break your efforts.
***************
For further insight: Dr. Cooper’s latest book, featuring Agile-Stage-Gate, Adaptive & Accelerated New-Product Development, may be ordered here. He also offers both public and inhouse workshops. For more information, call 781-891-8080 or email info@roundtable.com.